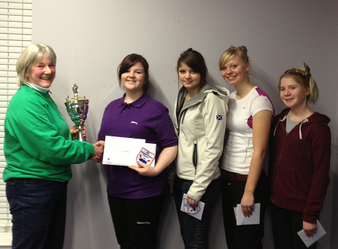 The final of the Dumfries playdowns for the Henderson Bishop Trophy was played on Tuesday 18th December.
The winning rink of Naomi Whyte (skip), Fiona Telfer, Heather Morton and Ellie Hamilton will go forward to represent the Ice Bowl at the national finals in Stranraer in February 2013. 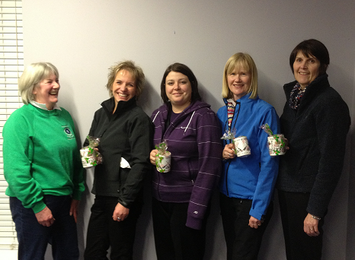 Susan Morrison.
Our photographs show Maureen Woods, DIBCA Ladies Section President, making the presentations.
The draw for the national finals can be accessed here and the other qualifying rinks will be listed here. Good luck girls!

Our second game in the Morton Trophy was at home against Ayr on 15th November. We had one convincing win, one convincing defeat and one very evenly balanced game which our visitors clinched with their last stone. It was a sociable occasion and the ladies from Ayr have written to say how much they enjoyed it. Caroline Donaldson was the winning skip and added a much needed 2 points to our tally. 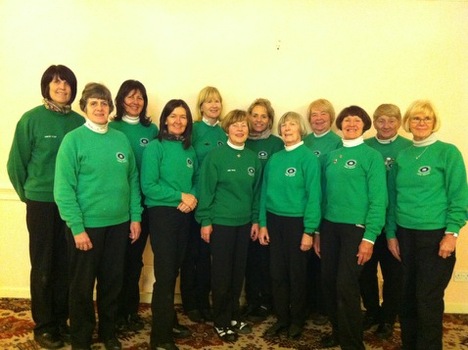 DIBCA Ladies had their first experience of the Morton Trophy when they played away at Stranraer on Friday 2nd November.
Although an enjoyable time was had by all, there were slim pickings on the results front as home team scored an emphatic win by 5 points to 1. The next game is scheduled for 15th November against Ayr at home.

Our annual pairs tournament took place on the 25th October.  12 rinks played 3 games of 3 ends in the schenkel system. Nancy Gallacher and granddaughter Katie Gallacher were the winners with Ailsa Hall and Janet King in second place. Sheila and Hazel were chief organisers of a very good day's curling and socialising.

FUN LEAGUE
Fun League now has a page of its own. Results will be posted after every round.

DIBCA UPDATES
There are several updates on the main DIBCA website.
Try Curling Sessions are free of charge so pass the word onto any friends who might want to 'have a go'.
There are also '1 to 1 - Improvers Sessions' available.
A 'Skips Night' is  being planned. Check out the 'Curling Development Officer's Blog'

START OF SEASON
Fun League draw and introductory letter for the season has been issued to curlers.
Letter can also the accessed here.

HENDERSON BISHOP  2012- 2013
The draw for the playdowns have been published on the R.C.C.C. website.
Dumfries draw can be accessed here.
Skips are asked to confer and agree suitable dates for the games to be played.
The Dumfries final should be contested by end of December and winners will go forward to  the national finals at Stranraer in February.